Following the historic visit: The Rivers State announced the recognition of the Eze Egi Stool as a Second Class Status on Sunday, February 7, 2010 at Erema Town during the 70th birth celebration of Chief Godpower U. Ake. The Governor of the Rivers State, Chibuike Rotimi Amaechi who made the announcement pointed out that the Attoney General and Commissioner for Justice has being directed to commence processing necessary documentations to enable the incumbent on the Stool occupy his rightful place in the State Traditional Rulers Council.

Eze Egi presenting his address before the Oba of Benin

In the address Eze Egi presented before the Oba of Benin and members of the Edo State Council Chiefs, Eze Egi said “the historic visit was in appreciation of the Ogba ancient cultural relationships with Akalaka, the great, and the entire Benin kingdom”. According to Eze Egi, Egi Ogba cultural relationships with the Kingdom of Benin, dates back to Egi Ogba Immemorial Oral Traditions, now the philosophy of Akalaka, the Great.

In his response, Oba of Benin welcomed his ancestral kites and kin from the Egi Clan in Ogba/Egbema/Ndoni Local Government Council Area of Rivers State in a historical and cultural visit, for the first time, led by Kingdom Elemchukwu Elenwa, the Eze Egi of Ogbaland, (Eze Ogba Ukwu). As a mark of honour, the Oba of Benin also presented some traditional ornamental artifacts, cola-nuts with some cartons of drinks to Eze Egi and his Council Chiefs.

The Oba of Benin, acknowledged with certainty Egi Ogba culture and language in its present form, saying that as his priest had pronounced, the Oba of Benin is now looking at the possibilities for the formal recognition of the ancient “Eze Egi Stool” in Rivers State, from where the incumbent Eze Egi stopped. His priest who had known the Oba’s intention thanked the Eze Egi and members of his Council of Chiefs for visiting the Omo N’ Oba, N’ Edo Uku Apolokpolo, Oba of Benin. The Oba of Benin also invited Eze Egi for this year’s “Ugie Erha Oba” in December 17, 2008. “Ugie Erha Oba” is a festive that celebrates the father of the Oba.

Eze Egi receiving some traditional ornamental artifacts, cola-nuts with some cartons of drinks from Oba of Benin 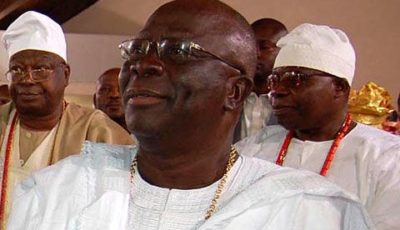