In an interview with Vanguard in Abuja weekend, the former governor said the only way out of the various challenges bedeviling Nigeria would be to adopt fiscal federalism, saying the country, as currently constituted, was unworkable.

He said: “Things that are happening in Nigeria are really very worrisome. There are those who feel some perception of injustice in the system. It is a perception, but sometimes, perception could be reality. ‘’We need to look at the situation holistically, and where there is justification, you correct them, and where there is none, you explain to the people why they should not have doubts or fears about them, if you wish, even-handedness of the government towards any part of the federation.

‘’But it points to one fundamental thing, that, we are still in the process of forming a country. ‘’If we had had one solid firm country, you would have found that a lot of these fears would not arise; there would be common fears, common to everybody but now they are sectional fears, sectional problems which means we have not really forged a country and there is an absolute and urgent need for that to happen.

‘You have to renegotiate’

“You have to renegotiate. If you talk about renegotiation, some people think you want to split the country. No, it is like everytime they tell you to go and investigate somebody, you think it means you must go and find that person guilty. No, do not forget that they investigated Dr Alex Ekwueme and came back and said in fact, he was poorer than when he went in (to government).

The people of Nigeria are dissatisfied with the current federal arrangement or whatever is binding them together now and are saying they want to renegotiate the terms of staying together. ‘’The President quoted Gowon. Gowon had said that keeping Nigeria one is a task that must be achieved. That task was achieved by military means. He (Buhari) is not a military man now, he is a democrat, a politician.

So, the only means politicians have is to negotiate. ‘’So, what did you mean by you won’t negotiate? If you want to keep Nigeria one today, you must negotiate the terms and conditions of the people staying together and it goes back to the conference report, it goes back to the concept of fiscal federalism. ‘’You would find out that in the final analysis, that is what everybody would be saying to you. Go and study as religiously as you can, the constitutions of 1960 and 1963.

“What is restructuring? Several people have used that word and have not been able to say what they mean. ‘’The few that have actually attempted to say what they mean either end up talking about going back to the regions as we had them before or adopting the six-zonal structure that had been proposed for Nigeria, which actually is in current usage but has not been sanctioned by the constitution of Nigeria. Others just use the word restructuring because it is almost like a buzz word, it is a popular thing to say now.

‘’I do not want to be caught up in the semantics. I will subscribe, absolutely and entirely, to the concept of fiscal federalism. People ask what is the difference between fiscal federalism and restructuring and I will explain. ‘’I am convinced that fiscal federalism can be practised with even the 36 state-structure and one federal capital territory that we have today in Nigeria. In fact, I can say, it is a must, for there to be peace and harmony, understanding among the federating units.

‘’Why haven’t the tar sands been exploited and so that they can go ahead and even have more money than the South-South, if you like, put together? It is just because we have refused to accept the concept of fiscal federalism. The governor of Kaduna was the one that said there is more gold in Kaduna than the whole of South Africa. ‘’ I am quoting the governor of Kaduna State. So, why should Kaduna State not be able to meet all of its obligations and put a lot of money into the federation account, which I condemn.”

The former governor also stated that the Niger Delta area was currently over-exploited, a development he said had partially fuelled militancy in the area. He said: “The South South has the feeling that the rest of the country wants to milk it, pollute it or completely milk it dry and then tell them goodbye.

There is that fear and it is not being addressed because the question is why are you preserving all your resources and exploiting only this one? “There is this concept of diversification. When you talk about diversification, people just think it has to do with going into agriculture, apart from oil. It is not sufficient. ‘’Diversification should come in more areas than just agriculture. If we had diversified our source of power, today we would not feel it so much, at least certainly not in the effect of these bombings (of oil and gas installations).

‘’You will diversify in several other areas and one of the areas you must look at urgently and you must begin to give confidence to other people who have these resources is in the solid minerals. ‘’Go and look at the ownership of Itakpe Iron Ore. It is a mineral resource but even the community is part of the ownership arrangement but tell me whether anybody was ever consulted before oil blocs were given out in the South-South. You know what I mean? ‘’That is why recently I wrote an article and said this Petroleum Industry Bill, let us go softly with it.

‘’Let us be sure that everything is even-handed because if you now come by this bill and treat oil mineral differently from other minerals and give the people on whose lands other minerals are found greater advantages than you have given to people on whose lands oil is found, there would still be dissatisfaction. ‘’So, why can’t we come out with “Mineral Bill”? The 10 percent that was supposed to be given, they said no, that because this one is governance bill. Is that happening in other areas of mineral exploitation? It is a question we have to answer.”

Why Buhari must look at the 2014 Confab Report

Attah also faulted partisans who had continued to advance reasons as to why the President Muhammadu Buhari’s administration must jettison the 2014 National Conference report. While he conceded that the recommendations contained in the report might not be totally perfect, he said the federal government should identify those it could implement since the exercise was widely accepted by the generality of Nigerians. “You would realize one thing; that the people who today are steering the party called APC, were in opposition at the time to the government in place. They did not like the idea, because they had this notion that whatever the government does, the opposition must oppose. ‘’So, they opposed the conference and I think they are just holding on to that for whatever reason.

There comes a time when you have to acknowledge that, well, you did it because you had to do it or you did it because you were wrong, then you change that position. ‘’Somebody was writing, a major feature writer, in one of the newspapers and he was trying to support the president’s position with regards to that conference report. ‘’He wanted to say that the president has good reasons not to want to consider that report because after all, and this was what he said, President Jonathan did not even want to have it. ‘’He waited until he was under pressure and because he saw that the people would like it, so he called for the conference.

Now, for me, that is an argument for somebody to look at that conference report because if it is something that the people would like, why won’t you do something that the people would like? ‘’I’ll add something else. I read where the current Secretary to the Government of the Federation (Babachir David Lawal) said he is so busy with governance and that it would take him about seven days to go through the report; where is the time to read the report? ‘’How can you be busy governing without being interested in knowing how the people want to be governed? To me, it is a very wrong argument.

‘’There are certain things in that report -I am not saying every decision taken was correct or right- that are imperative because they could bring the succour, they could bring the balm or whatever you need to create the harmony that we want in Nigeria today. You see, when people begin to say that they (government) did not like it in the first instance and so they must not honour it, if you find out that it is something that the people want, then you have to do it. ‘’Let’s not forget that the campaign mantra of this government was change. I was in the PDP then.

‘’When people asked me whether I saw my party winning the elections, I always told them that my party would not win and it was just for one reason, that what I hear from everybody is that we cannot continue this way, so change must come. ‘’Suddenly, if you remember the campaigns, PDP themselves started saying when we come back we would change certain things and I said, oh, you are now shouting change like the opposition is shouting change? ‘’So change must come, whether they would allow PDP to come back and effect those changes, fine but chances are that they are going to bring the people who conceived of the change to come in and effect the change.

What that suggests to me is that nobody can successfully stand against an idea whose time has come. ‘’The time for change had come and nobody could stop it. Today, the need for, let me borrow your word, restructuring the fiscal arrangement of Nigeria has come and nobody can stand against it and I mean it. It is not a threat, it is just one of those things you feel, because you see and you know that this is the case.

‘’Fiscal federalism must come and the kernel for the establishment and operation of proper fiscal arrangement within the country is in that report and that report cannot and must therefore not be ignored,” he said. The former governor also opined that there was no need giving financial bail-out to states, arguing that any state that could no longer meet its obligations should fuse with others. 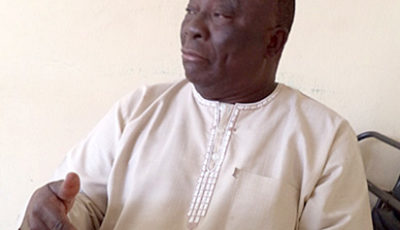