The Oba (Eze Ogba) of Ogbaland and the Chairman, Rivers State Council of Tradition Rulers.

Introduction: Dignity and self-determinal independence were and are still the watchwords of the Ogbas. That is why in Ogba there is nothing that would breed problem as much as dictatorialism. Ogbas prefer to remain on their own under hunger or starvation instead of enslavement of any sort.  The convention has not changed. Chief (Prof.) Addison Wokocha confirms that “If ogba man says: Erigam la edeki? (do I feed from your house?), he has finished with you no matter your height”, important and status in society. The people of Ogba nation, as a result of this phenomenon, never had a central leader except the Okhie (eldest man) of Obodo or Imno-gba who decided cases or made decisions only based on the general opinions. Anything short of this was regarded as dictatorship or high handedness which is uasully rejected outright. Ogba people relied much more on collective leadership and decision making. Singularity of headship was only a matter of necessity which of course did not or was not intended to distend or negate the volitional essence of the Ogbas. From the ongoing, one could adduce that the Ohali “stool” was in the ancient a community necessive headship who by nature “ruled” his household or extended progenition. The Umu-ohalis (offsprings of Ohali), as much as the Eze-Ogba(Oba) “stool” were the result of the dare need for the Ogbas to have a co-ordinator, a strategem for the processed curtailment of the Aboh (Eboh) excesses, which later metamorphosed to the Oba monarchy today.  (The Ogba Nation)

According to “Independent oral history”, it seems that encompassing royal kingship in Ogba had its beginning or at least became prominent from the Okoye Nwaebe era. An oral historian, late Chief Gilbert Nwajari (Oliha),confirms the Abohs, an Aboh pro-lineal kingdom, often attacked the villages of Ogba (slave raids). From Ebe the common ancestor to Umu-Egbnuru and Umu-Okoya to Frank A. Dickey versus Obi Nwachukwuma whose case the “provincial court” finds that the evidence on both sides is so conflicting and vague that it is impossible to establish the claim by Eze Ogba Obi Nwachukwuma. This was followed by Matthew Onwularu versus Archibong Dike, and laterly Harbert Olowu from Umu-Egbnuru versus Oba Chukwumela Nnam Obi 11 from the Okoya lineage. (The Ogba Nation 1460-2003 Volume 1  By Ben-Fred Ohia and Henry O. Onyedibia) 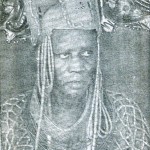 Eze Moses Igwe was crowned Eze-Ohali in 1971 after the Obigwe confrence of the Ohalis with full government recognition as a second (2nd) class chief (Eze).

The Eze-Ohali Throne has been one of the most controversial in Ogba mainly due to its inter-connectivity with the Oba (Eze-Ogba) monarchy. More than four hundred years ago the controversy generated by the relatedness of the Eze-Ohali and Oba Throne has defied a middle course of settlement in relation to the misgivings between the two Royal kindred of Ogba

The Ohali sovereign conference at Obigwe that necessited the installation of  Moses Igwe was attended by notable Ohalis such as Love Osi, Onyeocha Nwajel, Uche Isiodu (alias Ogba/Egbema), Wilson Okoroma and Eleanya Nwaigwe (the eldest man in Umu-ohali from Umu-Akalechi sub-lineage of the kindred). It was agreed that the Eze-Ohali should be installed at Omoku and reign from there. This therefore necessitated the siting of the Eze-Ohali stool in Omoku instead of Armah the ancestral home of the throne . (The Ogba Nation).

Beginning from Yudara (alias Enyike), each Nwadei Ogbuehi handed over to his successor the following traditional symbols of kingship which have been preserved to this day: Staff of Office (Akwruigwe), Elephant Tusk (Odu), Bell (Ukela), traditional symbol (ohuo). When enyike died, Eze Ogba Wudu was installed, he is noted for his courage, initiative and ability to inluence people. Eze Odua, who succeeded Wudu was also a warrior king almost rivalling Enyike in bravery and courage.  During his rule, one of the battles against Aboh occurred and he led the Enyikes to victory on all fronts. This particular battle which was fought early in the 15th Century should not be confused with the battle of early 19th century in which Okoya was beheaded.

When  Eze-Odua died, he was succeeded by Eze-Ocha. The latter was not a very warlike man like his predecessors but he possessed a charm and personality which made people come to him and do his will.  His name translated as “white king” describes his person and his rule. In his time, there was general peace and friendship and through his chrisma the villages of Obrikom and Ebgeku emerged together and the new Usomini capital was known either as Obrikom or Egbeku. Isoma Eze who succeeded Eze Ocha carried his predecessor’s peaceful traditions one step further. He prepared a charm known as Odu-Ocha (white elephant tusk) in order to protect Enyikes from war and to preserve peace. For Odu-Ocha to remain effective, it was believed that Enyikes must refrain from mushroom and ona. To this day, these food items are still forbidden in so call pagan Enyike homes.

When Odu Ellah succeeded Isoma Eze his chief concern was the preservation of the dignity of traditional rulership. Eze Ejeuku who succeeded Odu Ellah, suddenly moved to Obor to stay. Questioned why he should leave the rulership headquarters at Obrikom for the small village of Obor, he claimed that he merely went to farm whereas, infact, he had observed the trend of approaching colonialism (from the activities of the white men on the coast and explorers on the Niger) and felt that it was unsafe for royalty to remain exposed in the stategic center of Obrikom. Eze Ejeuku was succeeded by Eze Onyukwu who was soon killed through poisoning by his own relatives who had an eye on the kingship stool. Eze Onyukwu was succeeded by Oriogu Eze. After Oriogu Eze’s death, no one succeeded him immediately.  In 1931, Ellah Oriogu became a “low key” Nwadei Ogbuehi. Ellah Oriogu died in 1954 and his son John Wokocha Ellah  occupied the Nwadie stool from 1959. Following the chieftaincy enquiries by Rivers State Government in 1975 and 1976, he was recognised in his position in regard to the Usomini area of Ogba along with two other “kings” of Ali-Ogba. Eze Ogba Nwadei Ogbuehi, HRH Chief John Wokocha Ellah, a christain (Catholic) helped in the establishment of schools, colleges and a hospital in Ali-Ogba. He is succeeded by  his son senator (sir) Francis J. Ellah as the – 13th Eze Ogba Nwadei Ogbuehi.

The Rivers State announced the recognition of the Eze Egi Stool as a Second Class Status on Sunday, February 7, 2010 at Erema Town during the 70th birth celebration of Chief Godpower U. Ake. The Governor of the Rivers State, Chibuike Rotimi Amaechi who made the announcement pointed out that the Attoney General and Commissioner for Justice has being directed to commence processing necessary documentations to enable the incumbent on the Stool occupy his rightful place in the State Traditional Rulers Council.