As some Nigerians, especially from the South and Christian leaders pick holes in the recent United States of America Secretary of State, Mr. John Kerry’s visit to Nigeria, which they describe as discriminatory, Chief Ayo Adebanjo, 88, First Republic politician and an Awoist, wants them to have a re-think because Mr. Kerry came with a specific message for Northern leaders. Kerry, during the two-day trip, had after a meeting with President Muhammadu Buhari, visited the Sultan of Sokoto, Sa’ad Abubakar III, and also met with 10 northern governors.

However, in an interview with  Vanguard,  Adebanjo, who has been a strong voice for the restructuring of Nigeria into fiscal federalism, said Secretary Kerry came to deliver a bombshell to Northern leaders, who are considered to be against restructuring the country because the current structure favours them. According to him, Mr. Kerry told President Buhari and northern leaders that Nigeria may face serious problems without restructuring and that the US and other Western powers would not come to the aid of Nigeria, if it implodes on account of the faulty structure.

President Buhari, had last on Thursday, said his administration would support a constitutional amendment to free local governments from the stranglehold of state governments.

His Senior Special Assistant on Media and Publicity, Malam Garba Shehu, in a statement, said that Buhari disclosed the move when he received the leadership of the Association of Local Governments in Nigeria, ALGON, in Abuja. He stated that the President told the ALGON leadership that the amendment, when carried out, would better the lot of Nigerians at the community level. He stressed that a constitutional amendment was urgently required to clearly define the relationship among the three tiers of government.

Restating his call for restructuring along regional basis as was witnessed in the First Republic before the military coup of 1966, Pa Adebanjo said palliative measures like giving the states and local governments more powers will make little or no impact in addressing the country’s burning problems.

We want equitable distribution. We don’t want any region to be more favoured than the other.

Every region must have autonomy to rule itself and we all combine at the centre for what joins us together. If we had no federal system, Awolowo could not have done what he did in the Western Region.

You cannot bastardise restructuring. We want a new constitution, not amendment. Our constitution needs a surgical operation. That was what we did at the 2014 National Confab. What we agreed there is compatible with federalism.

That is why John Kerry warned northern leaders that they should ensure restructuring of the country and that if they refused they will not be able to handle the consequences. That is why they are talking about empowering the local governments but empowering local governments is not the solution to our problems. We need regional autonomy so that each zone will develop at its own pace.

It was in your paper,  Vanguard,  that I spoke about President Buhari before the 2015 election and the mistake Nigerians must not make. I have nothing more to add to that.’’ Go and get it.

In 2015 just before the elections, Adebanjo had said:

The South-West and Nigerians will be making a big mistake and digging their graves if they elect Buhari. They may not listen but, I, Ayo Adebanjo, is telling them. I am 87 years old (now 88), I can die any moment, so that when ever it happens, they would be able to say that indeed, that man told us.

That is why I am insisting that all the recommendations of the 2014 National confab should be implemented before the elections because, the inequality this country has been suffering all this while has been rectified with the recommendations of the confab. All the things that could cause us conflicts have been rectified. Our problems have been attacked from the root. And, that is why those who think it is not to their advantage don’t want it done.

Everybody believes that this present Constitution is bad and we then say let us all sit down and harmonize it, what is wrong in that? We have done it now but yet you don’t want it to be implemented. And where is the antagonism coming from ? From the beneficiaries of the awkwardness of the constitution. And they still want the Yoruba to continue to go along with that? If some Yoruba follow them sheepishly, probably because they don’t know the background, it cannot happen to someone like me…

We were part and parcel of National Democratic Coalition, NADECO. And during the NADECO days, we were the only ones shouting about the issue of Sovereign National Conference, SNC for the restructuring of the country because the federation was an awkward one. It was not balanced.

And it was because the military choked us in 1966. The Constitution the colonialists gave us at independence was jettisoned after the 1966 coup. And that is why you saw arbitrary creation of states and local government areas because the people there were northerners. And we said we don’t want the country to separate; for us all to live in peace, let us all sit down and restructure the country on the principle of federalism. 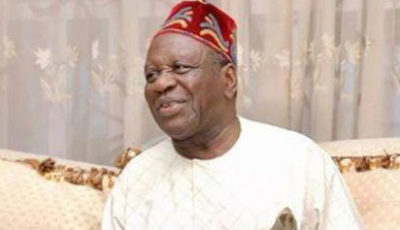